Congratulations to our 2021 Hope Fund Graduates!

Aug
18
2021
We are pleased to celebrate the graduations of another cohort of Hope Fund scholars: eight young men and women who completed their undergraduate programs with distinction and are now looking ahead to a brighter future thanks to generous donors who make this program possible. 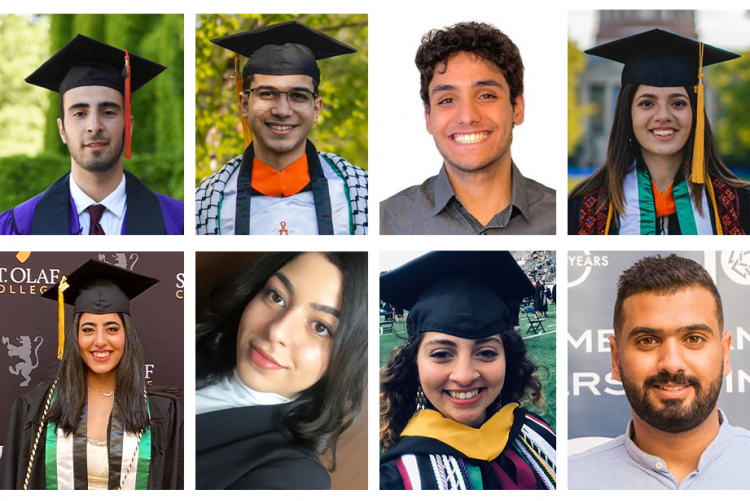 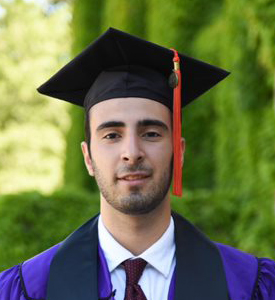 Khaled Abughoush graduated with a bachelor’s degree in industrial engineering from Northwestern University. “By studying at Northwestern, I got to work with the top researchers in the world to improve healthcare and transportation sectors,” he says, adding that, “moving on forward in life I want to work on projects that can help make a difference in both fields.” Khaled is an alum of three competitive U.S. Department of State-funded programs that Amideast administers: the English Access Microscholarship (Access) Program, the Lincoln Incentive Grants Program, and the Kennedy-Lugar Youth Exchange and Study (YES) program, through which he spent a year of high school in Denver, Colorado. He is grateful to Amideast and the Hope Fund for taking him to the next stage in his life by helping him with the college preparation process and for providing a supportive community of friends and alumni. “[B]eing close to other Hope Fund friends and alumni was great because we supported each other throughout the process,” he says. “I realized that you cannot always achieve all your goals on your own. However, with the community that you surround yourself with, anything is possible.” 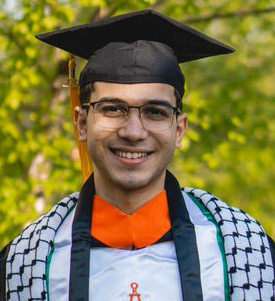 Mohammed Abumaileq graduated from the University of Rochester with a degree in biomedical engineering. The Gaza native is enthusiastic about the time he spent at the university’s medical center conducting research into how humans process a certain type of noise, with the potential for improving hearing aids. In addition, he was a member of an on-campus Indian dance group and the orientation team. This fall, Mohammed will start a Ph.D. program in biomedical engineering at Boston University with a focus on neuroimaging techniques that will improve understanding of neurological disorders such as Alzheimer’s. He says, “I hope that one day the impact of my future research reaches people from my community in one way or another. I also hope to address and spread awareness about the health inequities and inaccessibility in Palestine.” Mohammed is grateful for the support he received from Amideast, beginning with the year he spent in the United States as a high school exchange student through the YES program. “Amideast [is] a main contributor to where I am today,” he says. 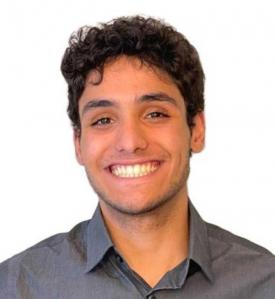 Iyad Amer graduated from the University of Rochester with a degree in brain and cognitive science. Originally from East Nablus, Iyad joined the EducationUSA Competitive College Club administered by Amideast. With support from the CCC and the Hope Fund, Iyad was able to begin his long-held dream of studying cutting-edge medical technology to one day bring back to Palestine and the greater Middle East. While at UoR, Iyad enjoyed the opportunity to take courses outside of his STEM field, including in film and media studies. He combined these diverse interests while working as a media specialist on a high-level research project on flavored tobacco products, funded by the National Cancer Institute and the FDA. He produced, designed, and edited all the marketing materials, including informational videos and graphics for social media. Iyad is currently interning at UoR’s Center for Health and Technology as a clinical project assistant for marketing and digital technology, continuing to build experience as he prepares to apply for graduate school. As he looks towards a future career, he notes that “Amideast’s support since Day One made it even possible for me to get this opportunity and as such turned my potential into reality.” 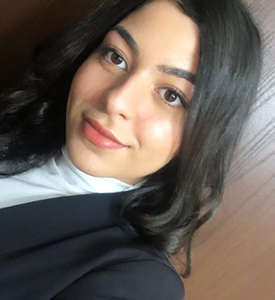 Hadil Alhayek graduated from the University of Findlay with a B.A. in international relations and psychology. She describes her college experience as a journey of self-exploration that included opportunities to travel, intern at amazing places, and conduct research abroad. The passion that Hadil brought with her from Gaza to advocate for mental health awareness, especially the impact of conflict on children that she experienced growing up in Toffah, Gaza, continued to inspire the direction of her educational journey. Hadil completed an internship with the International Rescue Committee last summer, working with asylum seekers in the United States. She also served as a speaker in a series hosted by her university about the Palestine-Israel conflict, winning the university’s Kuenzli-Harada International Student Award in April. Hadil has returned to Gaza to work with a nongovernmental organization in order to gain field experience in conflict-afflicted areas, noting, “I have only worked with people who have fled conflict, but working with people currently facing violence and aggression is understudied and there is a lot of work to be done.” Hadil is grateful to the Hope Fund for being “the safe backbone” during her studies, providing financial and academic support as well as a supportive ear “that we can talk to when things get hard. I am very thankful for their support!” 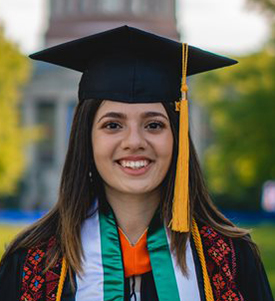 Sereen Assi, from the West Bank, graduated from the University of Rochester with a degree in biomedical engineering and will be pursuing her Ph.D. in bioengineering at the University of Pennsylvania this fall. Sereen is an alumna of the competitive Access and Lincoln Grants programs, which together with the Hope Fund opened the door to pursuing her passion for engineering. At the UofR, her drive led to a research semester abroad at the University of Sydney in Australia, working in a biomechanics lab to support the development of kangaroo tendon xenografts to replace human tendon parts. She notes, “I got to work as part of a team of professors, medical workers, and engineers from multiple disciplines, and I got to meet many researchers who came up with interesting biomedical technology.” As she looks ahead to graduate school, she is grateful for Amideast’s support during her educational journey, stating, “I never thought I could graduate from a school like the University of Rochester with a biomedical engineering degree, but Amideast prepared me for this journey in every way, and the Hope Fund made this dream possible by continuously supporting me throughout my studies.” 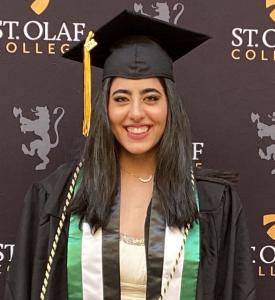 Aziza El Banna, a third-generation Palestinian refugee from Lebanon, graduated with a degree in psychology and neuroscience from St. Olaf College in Minnesota. She singles out the opportunity to make lasting connections with her peers, and professors as a highlight of her undergraduate experience. She also took advantage of the summer internships available to her in Minnesota, which “helped shape who I am today and helped me shape my career early on.” In the coming year, Aziza plans to gain experience in her field while applying to graduate programs in psychology. Looking into the future, she would like to give back by raising awareness in the Middle East around mental health. Before then, she feels the need to first gain more education and experience. Grateful to Amideast and the Hope Fund, Aziza says they “gave me a whole new future and helped make me believe that ‘better is yet to come.’” 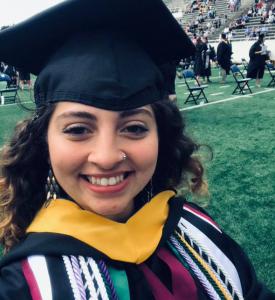 Razan Hamed graduated from Roanoke College with a degree in physics and a minor in math. A highlight of her time at Roanoke was starting the college’s astronomy club and designing a card game for physics students. She also “valued the freedom and endless opportunities” that she had, adding that these experiences changed her goals in life. Razan will soon begin graduate studies at Purdue University, pursuing a path that she hopes will enable her to improve education in Palestine. “I learned that everything is possible if you put enough work into it, and that’s why I think positive change is possible,” she asserts. Asked whether Amideast and the Hope Fund have changed her life, she replied, “absolutely, a 100 percent.” 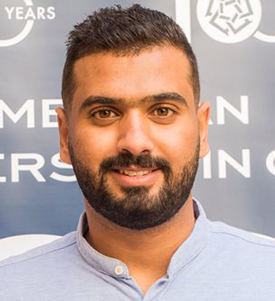 Ahmed Rezeq’s college journey began at California Lutheran University (CLU) and ended at the American University in Cairo (AUC), where he graduated with a degree in information management and a minor in journalism and mass communication. At both institutions, he valued the diversity of ideas, mindsets, and values that he encountered. Moreover, his experiences as a student representative at CLU and teaching assistant at AUC opened his eyes to the rewards of helping other student: “Getting positive feedback from the students I helped made me come to decide that I want to pursue a career at helping others getting quality education.” Ahmed adds that his life goals were also shaped by the hardships he faced to complete his undergraduate studies after finding it difficult to return CLU after a trip home to Gaza one summer. After spending a gap year in Gaza, he was able with the support of the Hope Fund to transfer to AUC. Deeply moved by this experience, Ahmed plans to give back to students who also face economic and political barriers to education in any way he can. “I was very thankful for being able to continue my education. Thankful enough to want to make it my goal in life to give back to those who are in the position in which I once was by contributing to their education by any means in my capacity,” he says.​​​​​​