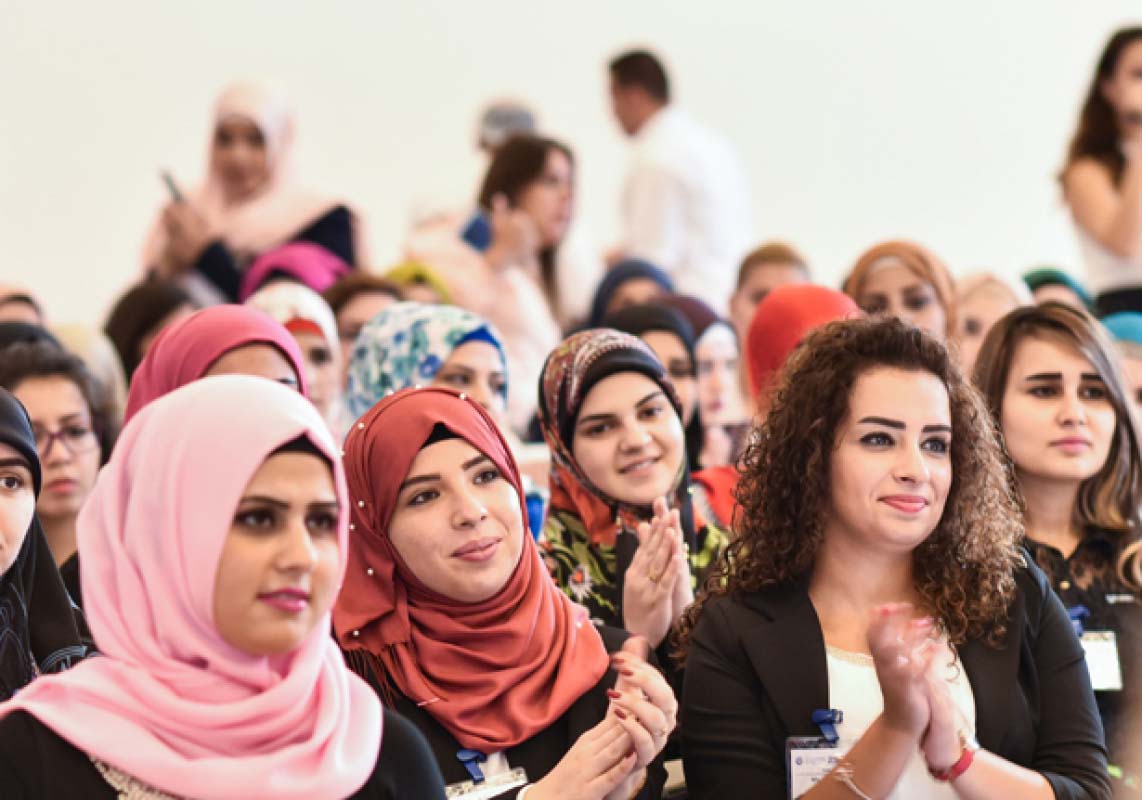 Apr
07
2015
Amideast’s new job skills programs are demonstrating that young women graduates can surmount barriers to employment in the competitive labor markets of the Middle East and North Africa if given the right skills and direction.

High school graduates in Jordan improved their chances of employment through the Skills for Success training program.

Initial training rounds of Skills for Success®—Employability Skills for Women, an initiative implemented by Amideast in partnership with the Union for the Mediterranean, ended in January in Jordan and Morocco. A total of 180 women completed the program, which is designed to meet the needs of young female high school graduates and was funded by the Norwegian and Flemish Ministries of Foreign Affairs. Meanwhile, in Egypt, Amideast offered Women@Work, another tailored version of Skills for Success, to an inaugural class of 22 female university graduates with funding from the International Labor Organization.

Graduates of these programs are already finding meaningful employment.

Making the Transition from High School to Employment

In Casablanca, Morocco, Karima Amezgou, 22, credits Skills for Success with helping her overcome a lack of direction her life had taken since her graduation from high school in 2010. Unable to find a job and lacking goals, she was also bothered by feelings of low self-esteem. The program helped her tackle these issues, gain confidence, and develop marketable skills to add to her resume.

“Skills for Success came at the right moment, when I really needed it. I am now a new person, with new life perspectives,” Karima says, noting that with the help of a professional resume and cover letter, she had two successful interviews and was accepted in both of them within a couple of weeks of completing the course.

Skills for Success also made a difference for Nawal Amesguine, an 18-year-old whose efforts to land a job after graduating from high school last summer were unsuccessful. She received her first job offer soon after completing the program and now works at a call center in Casablanca. "During this training program, I discovered myself. I am so grateful and lucky I had the change to be part of it."

A Program for College Graduates

Similarly, in Egypt, Rehab Adel, 23, a resident of the densely populated Imbaba district of Giza, felt dejected one year after graduating from the Faculty of Fine Arts. She had applied for countless job vacancies without receiving any job offers that matched her expectations or qualifications as a graphic design major. Even after her acceptance into the Women@Work program in December 2014, she felt she would have a long way to go before getting a decent job.

However, just three weeks after completing the program, she was thrilled to receive her first job offer, as a human resources administrator at a local packaging company in Cairo. “I never expected to get there so fast!” Rehab said.

The program gave Rehab new workplace skills and made her aware that her lack of interviewing skills, weak resume, and inability to effectively present her capabilities to potential employers were holding her back. It also qualified her to pursue a new career path in a field she finds "both exciting and promising."

Today Rehab is planning on investing her free time into being a freelance graphic designer and undertaking a small entrepreneurial project at home. "Finally, all of my hard work has yielded a result," Rehab asserts. "Now I know how to fully utilize my abilities."

Targeting the training needs of women graduates is critically important. Despite their educational achievements, women graduates across the Middle East and North Africa face high rates of unemployment — even higher than the region’s youth unemployment rate, which is the highest among world regions. Skills for Success is an employability skills training curriculum developed by Amideast to advance the job prospects of high school and college graduates by developing transferrable job skills not normally acquired in school — from business English to problem-solving to customer service skills. Participants also improve their understanding of the job market, knowledge of resources available to job seekers, and ability to set career goals

"Skills for Success came at the right moment, when I really needed it. I am now a new person, with new life perspectives."

"During this training program, I discovered myself. I am so grateful and lucky I had a chance to be part of it."

"Finally, all of my hard work has yielded a result. Now I know how to fully utilize my abilities.”