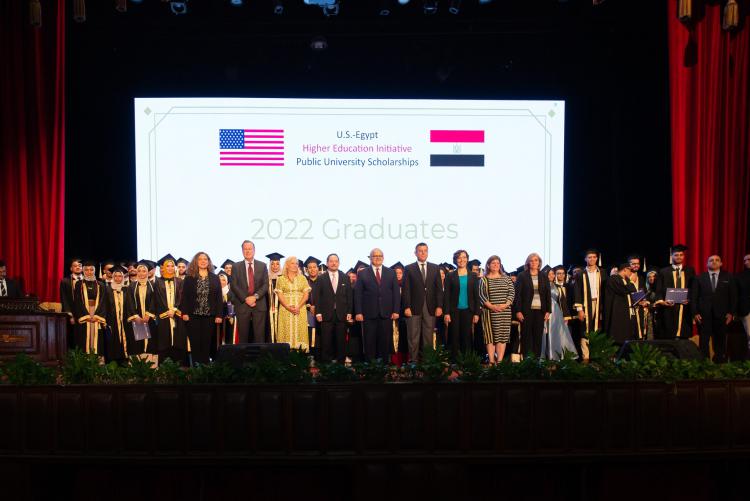 October 15, 2022—The HEI program is funded by United States Agency for International Development (USAID), supported by Egypt’s Ministry of Higher Education, and implemented by Amideast/Egypt, with additional funding for two visually impaired students from the Housing and Development Bank.

The graduating students completed their undergraduate degrees in special excellence programs at five public universities: Cairo, Alexandria, Ain Shams, Assuit and Mansoura Universities. Of special note, thanks to the program’s emphasis on promoting the full inclusion of people with disabilities, 12 percent of this year’s graduating class are students with a disability.

This scholarship program is one component of the U.S.-Egypt Higher Education Initiative, a USAID-funded investment in Egypt’s future that provides educational opportunities for talented, young Egyptians—women and men from underserved communities in rural and urban areas—to learn skills that will prepare them to meet the needs of the 21st-century labor market. Since 2015, a total of 673 students from all 27 governorates have been awarded U.S.-Egypt Higher Education Initiative Public University Scholarships. Within 12 months of graduation, 74 percent of graduates were employed.

All graduating students completed community service projects across Egypt, and some developed their own community service initiatives. Students improved their English through classes with AMIDEAST and independent study. They attended trainings to develop their workplace skills and ability to get a job. They also connected with actual employers to receive mentoring, have mock interviews, and complete internships. Further, over 200 graduates studied abroad for one semester in the United States.