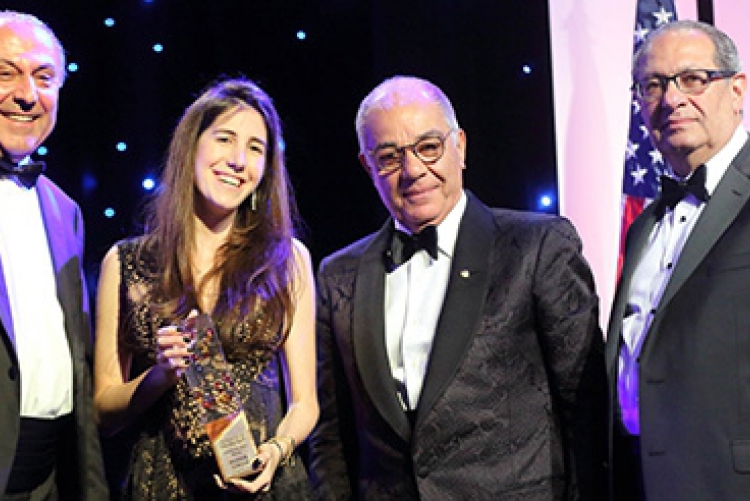 Amideast’s First Annual Education Hero Award Gala, held October 14, 2017, in Beverly Hills, California, was a great success. The event grossed nearly one million dollars and attracted 700 supporters from across the United States, Lebanon, and elsewhere, while raising awareness of Amideast and its work to expand opportunity for youth in all regions of Lebanon.

“This is the first time in our 66 years that Amideast has hosted a major fundraising event in the United States,” Amideast President and CEO Theodore H. Kattouf said, adding that the net proceeds will be used to fund scholarships for higher education, advance employment, and support entrepreneurship among youth from all backgrounds in Lebanon.

Another first was the new Amideast Education Hero Award, established by the Amideast/Lebanon Advisory Board (ALAB) in 2017 to honor an individual who has done much for education in Lebanon. As he presented the award, ALAB Chair Anis Nassar emphasized the lasting legacy of the honoree, the late Lebanese philanthropist and entrepreneur Maroun Semaan, a man “determined to change as many lives as possible, much as his own life was changed by the scholarship he received to study at the American University of Beirut.”

Nour Semaan, who accepted the award on her father’s behalf, recalled her father’s belief in the power of education. “My father was passionate about many things, but none came as close as education,” she said, adding that he believed in helping people break out of the circle of struggle and that “the right individual can change the world.”

Also recognized during the evening was gala chair Harry Nadjarian for “taking Amideast to new heights.” Together with a committee of 28 business and civic leaders, the Los Angeles businessman succeeded in organizing an event that will support Amideast/Lebanon’s efforts to offer a diverse mix of educational and training services, which have already touched the lives of more than 500,000 residents of Lebanon since 2000.

The evening’s entertainment was headlined by two Lebanese performers, iconic multi-platinum singer and songwriter Najwa Karam and award-winning pianist and composer Guy Manoukian.  It also included music by the California Crooners and a surprise performance by pianist Omar Rahbany.