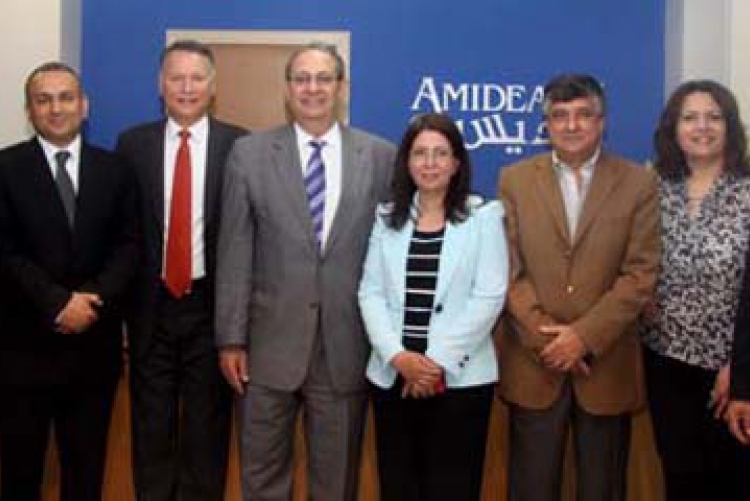 Since fall 2010, Amideast’s new advisory board in Lebanon has enabled Amideast to expand its offerings of scholarships and other opportunities for youth in Lebanon. In June, Amideast’s office for the West Bank and Gaza became the second field office to adopt this community-based approach to strengthening its ability to respond to local needs.

In less than two years since its establishment, Amideast’s advisory board in Lebanon has provided a dynamic mechanism for interacting on the local level.  Generous contributions from its 23 members are helping Amideast/Lebanon provide scholarships for academic study and professional skills training. They are also supporting the efforts of the Lebanon office, undertaken through our Diana Kamal Scholarship Search Fund (DKSSF), to enable bright deserving Lebanese youth to compete successfully for  admission and scholarships to leading U.S. colleges and universities. Composed of prominent local business and community leaders who share Amideast’s commitment to Lebanon’s development, the board is also a source of guidance, as well as diverse internship, employment, and mentoring opportunities for youth enrolled in Amideast training programs, particularly at Amideast/Lebanon’s new Cisco Entrepreneur Institute.

Recognizing the valuable contributions that advisory board members make to our mission in Lebanon, Amideast recently established a similar advisory board in the West Bank and Gaza.  This body will help Amideast advance its work in several priority areas, including the expansion of scholarship and training opportunities for Palestine’s large youth population. Amideast is pleased that the following prominent Palestinian business and civic leaders have agreed to serve on the new advisory board:

Amideast President and CEO Theodore H. Kattouf attended their inaugural meeting, held in Ramallah in June, during which Mr. Aker was elected the board’s first chairman.  At a reception that Amb. Kattouf hosted in their honor the night before, he expressed his appreciation of the commitment that the members of these advisory boards are making. “Amideast is most fortunate that such distinguished, successful and public-spirited individuals have agreed to serve on the Lebanon advisory board and now on our first-ever Palestinian advisory board. In both countries Amideast has sought to tailor its programs to meet the evolving needs of the local community. Going forward, our ability to benefit from the wisdom and support of these distinguished individuals will make this priority much easier to meet.”