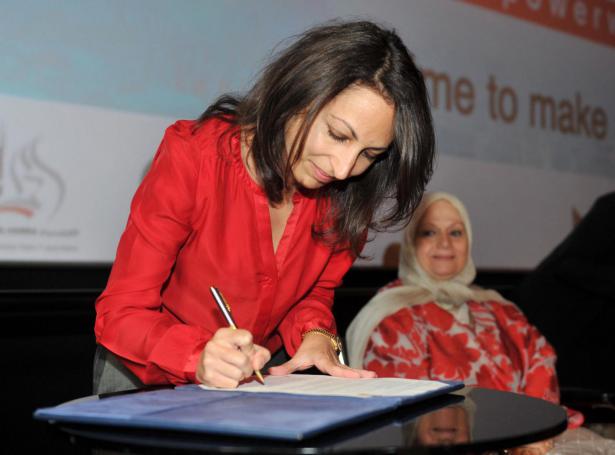 At a special event today, Amideast joined other private sector organizations in signing the Statement of Support for the Women’s Empowerment Principles (WEP) in Kuwait. By doing so, they indicated their support for the Kuwaiti government’s ongoing efforts to implement SDG 5, the UN Sustainable Development Goal on gender equality.

“I am truly honored to have officially signed the Women's Empowerment Principles on behalf of Amideast and to be part of a global network of like-minded companies and guidance on advancing gender equality and women’s empowerment in the workplace, marketplace, and community,” said Samar Khleif, Amideast’s country director for Kuwait, who represented Amideast at the event.

The signing took place during the “Women’s Empowerment Principles Conference – Kuwait,” which was organized by Kuwait’s General Secretariat of the Supreme Council for Planning and Development (GSSCPD) and the Women’s Studies and Research Center (WRSC) at Kuwait University in partnership with the United Nations Development Program (UNDP).

The WEP provide a road map for businesses on how to empower women in the workplace, marketplace, and community. Although Kuwait has made significant progress to close the gender gap in education and the rate of participation of Kuwaiti women in the labor force is one of the highest in the region, more needs to be done. The support of many stakeholders — the private sector as well as governing bodies, civil society, academia, and media — is critical to the success of the effort.